Perhaps our two year old wisteria in Corfu will grow to sprout as many violet rhizomes as the one entwining our balcony in Handsworth. We've lived here thirty years

Sunday lunch with Rachel and family at their house a mile away to discuss sharing a plot on the Victoria Jubilee Allotments when they're ready in a few months. I've been studying The Allotment - a DVD that reassures without glossing over the work and perseverance needed to have a fruitful allotment. We discussed what we knew, vegetables we liked, wondered what we needed to learn, and how we might share the work and if we could get a plot next to those of others we know, so that we can all help each other as we did during the long campaign to save the Victoria Jubilee Allotments (VJA). Rachel will be great for plot share, an effortless capacity to move between private and public, waged and voluntary and a multi-tasker before the word was invented, a watchmaker, communitarian, mother of three married to John, an artist of matching versatility, fun and easy company, curious about others, enthusiastic; we were already planning plots for schools and other's in Handsworth, scanning the prospects. 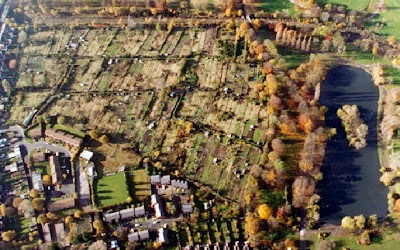 The VJA (see 2008 Google map), south of Handsworth Park lake, when our campaign began in 1990; glebe land given to working men by the church for growing food, sold off by their descendants for building land after the VJA committee, in 1992, had altered their status as a Friendly Society to a Property Holding Company. Prolonged local campaigning has ensured that under a S106A, two thirds of the site will be handed over to the City for sport and urban food-growing - 80 plots, each 200 sq.yds., now being laid out on the north west of the site. (Photo: courtesy of WM Police) 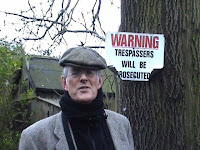 It feels a little unreal after so many years' campaigning and anticipating - the difference between gardening and politics, something to which we've all given time. My step-father's example of domestic vegetable growing helps. Rachel's father grew Chinese lettuce on a commercial scale, and she rotates a few crops in their garden "but I'd like a chance to grow things in rows as he did" she said. Yesterday, down at the market, I saw a Birmingham Mail story that suggested the difference between annual expenditure on allotments across Birmingham - £467,000 - and annual rents from tenants - £75,000 - was creating a problem when it came to the amount needed to invest in maintaining and improving allotments sites and even laying out more allotments to meet increasing demand. 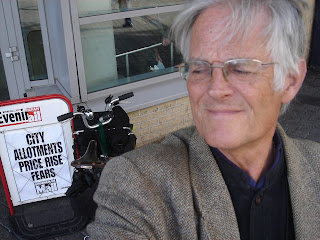 Rent charges are a national issue; rates are being reviewed in many places as food prices rise and demand for plots increase. Any rebuttal of the case for such rises would need to start by comparing the cost of allotments, and other places for growing food close to home (especially private gardens), with the unsustainable costs of agribusiness. In those terms a case can be made for keeping rents low as an investment in reforming the way we produce our food.

[From Andrew Kimbrell (2002) The Fatal Harvest Reader: The Tragedy Of Industrial Agriculture. Island Press] A modern supermarket produce aisle presents a perfect illusion of food safety. Consistency is a hallmark. Dozens of apples are on display, waxed and polished to a uniform luster, few if any bearing a bruise or dent or other distinguishing characteristics. Nearby sit stacked pyramids of oranges dyed an exact hue to connote ripeness. Perhaps we find a shopper comparing two perfectly similar cellophane-wrapped heads of lettuce, as if trying to distinguish between a set of identical twins. Elsewhere, throughout the store, processed foods sit front and center on perfectly spaced shelves, their bright, attractive cans, jars, and boxes bearing colorful photographs of exquisitely prepared and presented foods. They all look unthreatening, perfectly safe, even good for you. And for decades, agribusiness, the U.S. Department of Agriculture (USDA) and the Food and Drug Administration (FDA) have proclaimed boldly that the United States has the safest food supply in the world. As with all the myths of industrial agriculture, things are not exactly as they appear. The Centers for Disease Control (CDC) report that between 1970 and 1999, food-borne illnesses increased more than tenfold. And according to the FDA, at least 53 pesticides classified as carcinogenic are presently applied in massive amounts to our major food crops. While the industrialization of the food supply progresses, we are witnessing an explosion in human health risks and a significant decrease in the nutritional value of our meals. 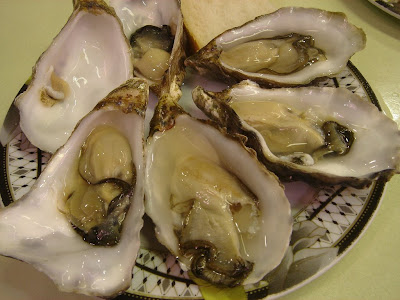 A favourite snack from Pearces Shellfish in Birmingham Indoor Market

On Friday, in rain, I cycled to Soho Road, caught a 74 bus to Dudley to run a one-day workshop on understanding council politics. Dominating people's thoughts was the national scandal of expenses that confirms the prejudice of cynics, distressing those who care about democracy. With input from two officers of the council and an elected member, the day was well received, and I enjoyed the company of intelligent people ready to learn about their council's political environment, the personality of its leaders and the issues they faced. "Why do we have elected councillors..." a rhetorical question from a guest tutor, "...because we're a democracy."
* * * 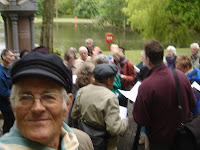 On Saturday morning the Birmingham Victorian Society came to visit Handsworth. I contributed a talk and short tour of the park, walking our guests between the Hamstead Road gates and Cllr Palmer's fountain overlooking the lake. I strove to convey the spirit and enthusiasms of those who had devoted so much time to founding a park in the 1880s:

As the civic gospel of municipal improvement spread from Birmingham into the estates of Handsworth, its local government leaders saw a public park as a benefit for the district. Following the setting up of an education board and a free library, the adoption and proper kerbing of roads, street lighting, tramways and the construction of sewers, influential voices in the district began to speak of the need for a 'lung' in the city. They did not pursue the idea simply out of expediency or to raise the value of their properties. Such self-interest was present - used unashamedly to strengthen their case among the practically minded citizens of Handsworth - but opposition to the Park from that quarter was at times so intense that calculative motives alone would not have carried the project through. [from Baddeley, S (1997) The Founding of Handsworth Park 1882-1898 Birmingham University] 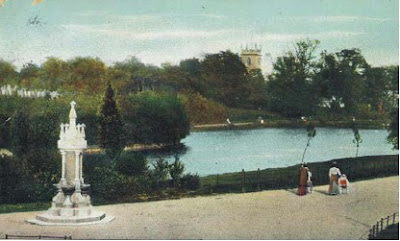