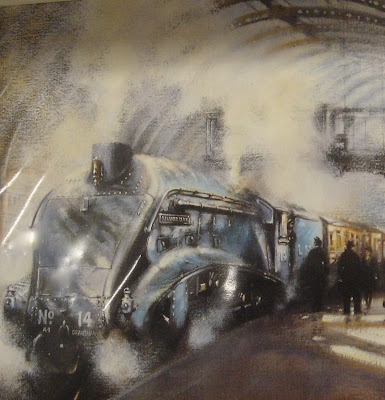 My mother says I was hardly two years old. How I could remember? This is a recent picture, I think, on sale in the shop at the National Railway Museum, but it's my first memory - from a pushchair on the platform in early 1944, gazing up at a great dark sloping shape, steam rising to the curving roof of York station. My dad was stationed at Helmsley with the Guards Armoured Division in training on the Yorkshire moors for the opening of a second front in June '44. This Tuesday, sixty four years later, I went to York for a meeting with Jan D, and dropped into the Museum next to the station. I'd never been there. The first engine I saw was this one. I roamed around it, touching its polished streamlined valances and massive drive shafts; climbed onto the footplate amid the copper brightwork, steam gauges and red painted valves, where with three others, all railway men, we chatted - about the Mallard, about Dr Beeching - "only obeying orders", about the railways and hope for their future. 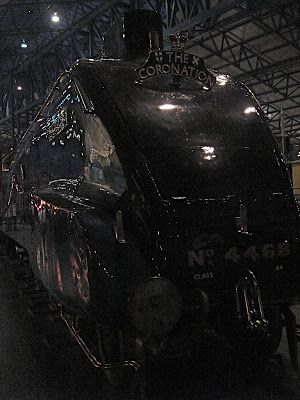 And so south again, via Doncaster, Sheffield and Derby, to Birmingham on a X-Country train. Is it possible that in some way my feeling for trains partakes of the phenomenon of imprinting - so that I treat them instinctively as though they were family, and tubby Richard Beeching, for the sundering axe he used in the early 60s on 5000 of Britain's 18000 miles of railways during a formative period of my growing up, is the object of irrational loathing far beyond my dislike for the policies of the government he served? [See overview of the Tornado - first new steam train in Britain to be working from 2009] 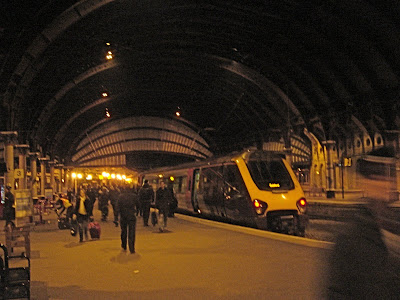 * * * *
Back from York at 8.30pm I cycled down to the Warehouse at Digbeth for the Friends of the Earth Christmas party and had some mulled wine while I talked to Karen Leach and Ben Mabbett about how FoE might support our group over the delayed S106A on the VJA. Joe Holyoak spoke to me the other day about a piece he was preparing on the place of growing space in the urban land-use mix. On Tuesday I'm seeing Paul Peacock and Paul Aitken who are visiting us in Handsworth and on Wednesday I'm seeing Richard Wiltshire - at our back, concerns about food supplies in cities. * * * *

Questioning for Overview and Scrutiny
I have come near to refining, not perfecting, a training session on Questioning for Overview and Scrutiny that fits busy councillors' diaries. I tutor this, but it could, as easily, be included in a briefing for new councillors by a scrutiny support officer. People who cross-examine - barristers - or interrogate - police, can spend a career refining their skills. They get lengthy apprenticeships. Councillors appointed to overview and scrutiny committees have little time to learn what may be involved. Even if some local politicians have professional backgrounds that make them familiar with questioning, the powers of scrutiny and its resources are limited compared to those on which a court can rely. Parliamentary Select Committees, upon which scrutiny is partly modelled, have far more generous staff support than their local government equivalent. I've suggested four questions: closed, open, probing and reflective, to which I've added two more; rhetorical questions that get people settled in, "May I say how pleased we are that...May I introduce you to an expert witness who...." (Hansard omits a '?' on these); and second, comes silence, a non-verbal interrogative, possibly with raised eyebrows and pursed lips, supplementing a verbal - tricky because a group can find holding silence for more than a few seconds uncomfortable. The characteristic of each question is explained. Closed seeks 'yes' or 'no' answers. it is similar to a leading question, which is useful if it's to save time while getting to the point where evidence is needed (e.g. a judge may permit counsel to lead a witness to the point where their evidence needs to be brought out by open questions). A closed question also provides brief confirmation of the answer to an open that has drawn out the witness's understanding, but can also lead to drawing out more than needed, unless there's guidance on what's wanted by way of depth and range of answer. Probing is when, having worked gracefully through a preliminary mix of open and closed questions, you start pursuing detail. How well these probing questions are phrased depends on how well the ground has been prepared - especially how well members have refined and shared their terms of reference. From time to time, a reflective question summarises what has been understood so far, allowing a witness to agree or correct. It also helps clarify everyone else's understanding of where the questioning has taken things so far; "So what we've learned is....? You've described how, this, this and this happened...Have I got that right?" I take people through transcripts from Select Committees - asking them what seems to be happening in the exchanges transcribed and whether particular questions or combinations of questions have been effective in throwing light on areas of doubt, and where more probing is needed. I explain that scrutiny should avoid getting a reputation for wrong-footing witnesses; that whoever is chairing the scrutiny should give witnesses notice of lines of questioning and the committee's areas of interest. A follow-up letter asking if being a witness has been positive or not, and whether there were relevant matters the questioning had missed. I also share this assessment, by a group of members, in one council where I was working, of where they were falling short on questioning:


1. Members make comments rather than ask direct questions 2. Members will often ask an irrelevant question or one that is not directly connected with the issue under discussion 3. When members do ask questions the questioning does not get to the heart of the matter 4. Members don’t pursue a line of questioning with supplementary questions 5. The way that the Chair allows each member to ask a question makes supplementary questions difficult as the discussion becomes disjointed. 6.Members may pursue a line of questioning but abandon it if the officer appears defensive or gives vague answers – they get thrown off course easily 7. In the past we have had planning meetings for all members prior to the meeting taking place to agree lines of questioning but this is often ignored in the meeting itself.

We explore these, recalling examples from direct experience. Then we practise questioning that will make the best use of everyone's time, finding out things, avoiding ill-manners, balancing courtesy and inquisitiveness, being a 'critical friend'.
Posted by sibadd