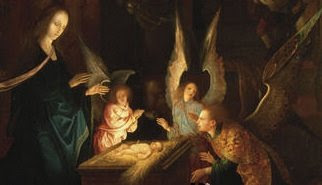 500 years ago Jan De Beer had a studio in the Netherlands that turned out nativity scenes on a kind of early production line - much of the work done by his apprentices. My friend Dhiaa, as we paused at this picture last Christmas, said he felt he knew where De Beer had painted and not one of his students, making this picture more special among his many nativities. I too had seen what he'd seen - the closed eyes and streaming hair of the angel closest to the child as though light were coming out of stillness with the force of fire. 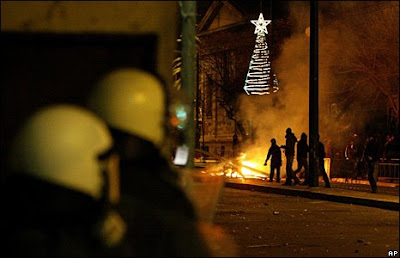 * * * *
Nine sat down for our Christmas lunch. I was in a sort of daze having had a painful tooth extracted the night before by the 24/7 dentist at Perry Barr, so I was forbidden to drink more than water, and remained in bed until noon, called down to lunch by Amy with a paracetamol. 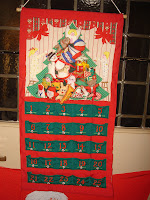 We were wondering amid our happy chat how things will seem in another year. The £ is sinking fast against the € - already €1-£1.05 which, after commissions, is one-to-one. When we bought our house in Greece in 2006 it was more like £1-€1.50. Liz's boyfriend has lost a house - mortgage foreclosed. Another's in the car selling business - very slow. Dot and Arthur live frugally on their pensions and savings. Lin as thrifty as they come guards my income from my extravagance and the tax office. We own no shares. Richard's been given a Zavvi gift certificate he can't use as the company's in administration. Lin's good friend's daughter has recently lost her job in Corus. Amy patrolling FI - Birmingham's town centre - when I've strolled with her, greets quite a few of those habitually sleeping out, knowing them by name. Vagrancy more than shoplifting, pickpocketing and breaches of the peace presents her chief challenge. 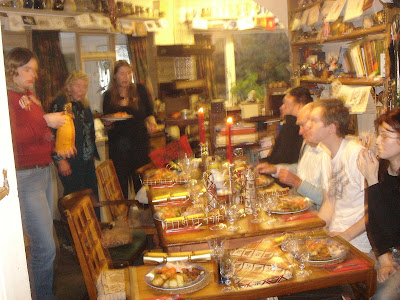