Harris Tweed in the wet 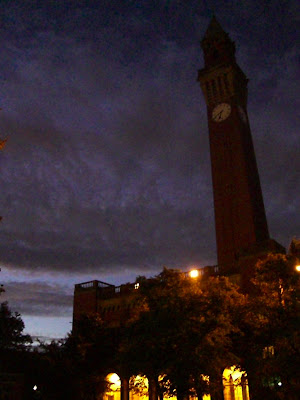 One of the things I enjoy about cycling all year round is that you get as used to the climate as a farmer. I embrace this damp, chilly and frosty weather. I like making the right choice of what to wear. Norwegian quote: "There's no such thing as the wrong weather; only the wrong clothes". Even in Birmingham a brisk wind brings memories of an equinoctial on the Cambrian coast, strolling through gorse knowing the ocean's hidden beyond a rise, a hint of grating roar. I like being warm out when it's cold out, the way my Harris Tweed jackets (bought cheap in the Birmingham Rag Market) keep me cosy on the journey between home and campus, getting dew on the outside so that indoors they give off the friendly pong of a drying dog. Mark's mail from Ano Korakiana made us sad at the miles between us:


Hi Simon and Linda. Just a quick one to say all is good here in Corfu. Your sail is still awaiting repair only because the sail maker we have working with us won't start until the end of the season which is another week or so away. I'm also in need of some work on my favourite shooting trousers by her, but no problems it will be sorted by the time you are out here next. She's very very good and knows her job . Sally and I have just got back in from a foraging trip at the local dump as we are getting our November the 5th bonfire ready for this year. We put on a good party and this year - a pig on the spit and BBQ plus of course the bonfire. Lots to eat and drink, will be a shame you are not here for this one but maybe in the future. Hope this email finds the both of you well and not too cold. I am in shorts and t-shirt still in the day weather here very nice. Cheerio, Mark. 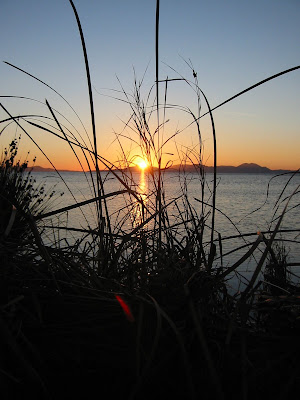 P.S. A sunset from the marsh of Kalamas looking back towards southern Corfu. 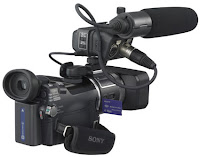 I've dipped into my savings with Handsworth Breakthrough Credit Union and bought myself a new video camera, from Scott and Jas at CVP in the old Pinmill at Studley, for work, after the machine I've relied on for my research over 7 years abruptly failed to capture a usable sound track and I lost a good political-management conversation, to my frustration and the disappointment of the people I was trying to film, hence contrition pie:


Dear X. I have been selfishly preoccupied with my own frustration at losing the conversation between you and the Leader last week – not to mention hours of trying unsuccessfully to recover the film’s integrity. As a result I may have been remiss about apologising to both of you for wasting an important hour of your shared time and the prior work that led to it. I’m so sorry this happened. I absolutely respect your reluctance to repeat the experience. The conversation was exciting and creative; full of spontaneity and insights on the nature of leadership in government. It would have been a crowning addition to my archive and of great value in teaching. To try to record that again - certainly for the time being - wouldn't be easy. My Japanese guests found the experience of watching a Leader and Chief Executive in conversation exceptionally valuable. For that, I and the University are most grateful. I have sent a similar letter to the Leader. Yours sincerely, Simon B

It was with relief that the next week, using the new camera - a Sony HVR-A1E, I got a film from another Leader-Chief Executive conversation, awaiting approval, but I'm confident it'll be approved and used to help diffuse the art of government, especially the construction of trust between managers and politicians. 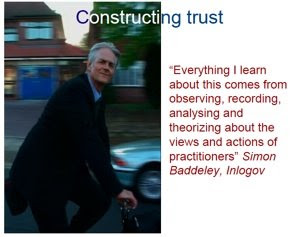 I've signed myself in for one-to-one tutorials on my film-making at Apple in the Bullring. The challenge is to take a good film with the right lighting, framing and sound, then, having transferred the film via iLink to my computer, to be able to title and edit it as unfussily as possible, finally choosing the right codec to compress it into a form that allows me to use it to display via my laptop for other's learning - and my own. * * * Yesterday Yuka from the Japan Local Government Centre came up to study my beloved Handsworth Park and learn more about the role of parks in recovering community. After she arrived - apologising profusely for the fact that the Virgin Intercity from London had been emptied at Birmingham International; passengers told to get on the next stopping train to the city centre - we went to the Sons of Rest building where, over half term, children were playing and learning, discussing social dilemmas with teachers, a police woman and the Rangers. Because I was there Mohammed - one of the excellent Rangers we now have in Handsworth Park as part of our 20 year campaign for the Park's restoration - suggested I talk to the young people. I don't mind working with adults in many settings - conferences, workshops, tutorials - but children worry me. I kept it very short; circulated old press cuttings and photos from the mid-90s of vandalism, graffiti, reports of crime and neglect and school children with parents and teachers petitioning for play space.


"This is your park. Your parents helped bring this place back from a very sad state. I remember this building where we are - falling down, scattered with filthy rubbish, open to the weather, due to be demolished. It is the last Sons of Rest building left in the city. It was also the first. (Here I pointed to the cleaned and polished memorial plaque to Lister Muff - lovely name - that had been rescued and fixed to the classroom wall, after sitting in our garage for ten years). Impressed by our petitions, local politicians and officers decided to cancel the wrecked building's destruction. They mothballed it with a high steel fence until the cash was raised from the Millennium Lottery Fund to rebuild it, and - as we dreamed before you were born - restored to be a place where where we can meet and learn together. Thanks for listening to me."

Yuko, who I introduced, got a clap which was really nice! She took the photo. 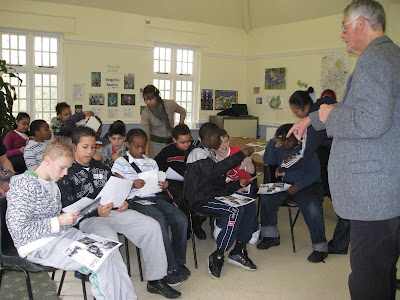