Tell me some lies. I am working on a modern plot for a revived version of Aristophanes’ comedy ‘The Frogs’. It is September in Greece. There has been one hour of rain since April. On the beautiful Ionian island of Corfu the authorities have been so anxious about water they have considered turning away the summer geese rather than face the health hazards of such gigantic flocks lacking water for their pleasures. The gods have surrounded this paradise with a multitude of small coves facing crystalline sea, gifting men with winter rain in abundance to replenish reservoirs of water deep in the island’s rocks, but the geese in their eccentric yearnings have found sea-girt shores inadequate and so, for their delectation, men have dug thousands of concrete swimming pools across the island which they fill and refill with hard water from the island’s aquifers, laced, for cleanliness, with chlorine. A progressive architect is seeking, in these times of apprehension about this waste of precious water, the coarseness of concrete swimming pools which lie empty for the winter months collecting leaves and moss, and the hazards of chlorine - revealed by EU risk analysis - to promote pools that imitate nature; pools that do not need annual emptying, regular scrubbing and refilling from mains water. He has, as an experiment, constructed, beneath the eves of his house, which views the sea through the tops of olive trees, a shallow edged irregular rain fed pond which, in draught, he can top up economically from the mains. It is arboured by climbers, edged by flowers, with lilies, papyrus and purifying reeds lining its shallows. Above it swallows swoop. Colourful fish, small and large, swim happily in its deep but limpid centre, surfacing excitedly when anyone approaches. This pond, sun-stippled through the overhanging vine, adorns the house, providing its occupiers and their guests with the pleasure of bathing or paddling in clean, often soft, water or dipping their feet to enjoy the cool toe-kissing of golden carp. At night frogs visit. In spring it is their trysting place. The wide adoption of such ponds could solve the island’s looming water crisis since they keep themselves clean all year round, need no chlorine and no refilling, making full use of winter rain, stored in adjoining sternas or reservoirs for dryer months, harbour fish that eat mosquito larvae and frogs and, being shallow edged, are safer where children are about. The architect’s once friendly neighbour, has, under the goading of his envious soul and a covetous wife preoccupied by disparities in stremas between the two properties, been transformed into a Lopachkin type of orchard-chopping self-made bread-hater. The Gods, who have schemed to have the island destroyed by an over proliferation of summer geese as a lesson to men, now use him as a gadfly to punish our hero and frustrate his plans to solve the island’s water crisis. Achilles, overtaken by fits of uncontrollable rage begins to hurl of imprecations over his neighbour’s wall, then rocks, and - as the play opens one warm winded moonlit midnight – he climbs the wall, naked, hair awry, and makes a mad violent midnight physical attack on the architect and his lover, while his wife, her hair streaming, urges him on from the top of the wall, screaming through the night that she is a sorceress who mates with frogs. The police - comedic figures - have been unhasty in reaction to the gradual break down of civility, but, following report of this dramatic incident, they take note of the architect’s plea for their protection. They phone Achilles from their station in the nearby town, hoping to effect a reconciliation of neighbours. However, Achilles, in his rage, uses such porcupine language to the police, the chief beedle is provoked. He rises from his night desk, summons aid, and in the gendarmerie 4x4, drives out along the dark olive lined roads to arrest Achilles and bring criminal charges against him. In the second act, Achilles’ lawyer, Photis Serendipitos, an opportunist rare in his profession, has drawn up a simultaneous civil charge sheet, under article 989 AK, against his client’s victim. It claims that Achilles was provoked ‘beyond reason’ by ‘sleep deprivation’ caused by the ‘noise pollution of croaking from his neighbour’s frog farm’ which has led, collaterally, to an ‘invasion of mosquitoes and toxic smells threatening his client’s well being’, making life’ so intolerable for him and his family’ that he seeks to have his neighbour sent to prison or fined thousands of euros on each of several counts, and asks the court’s permission to take such ‘drastic measures’ as may be necessary to end this menace (to be continued). * * * 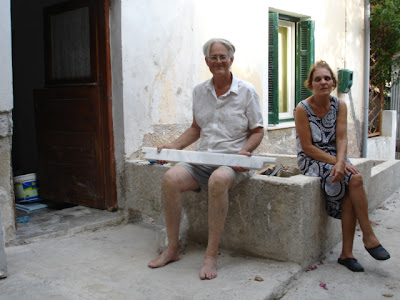 We do work we can do. Lin’s painted our walls inside - gallons of starkest white rollered on top of properly spread astari that helps the paint to grip on plaster, holding walls and ceilings together. She's conscientiously chased out edges with a brush. The revealed tiles and marble are showing cleaner as Lin scrubs and scrapes skirtings blemished by old paint, lino glue and mortar. I’ve chiselled out the side door frame and inserted the marble strip to exclude driven rain. It’s held in place by its fit and the white acrylic sealant carefully inserted by Lin and smoothed by finger. I hid a 50c coin between marble and door and I’ve adde 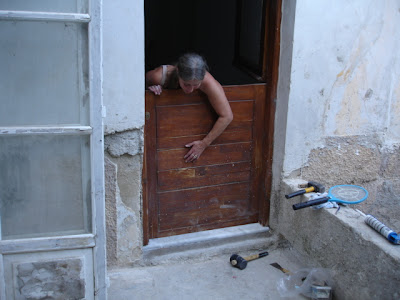 d a bolt to hold its foot to the marble. We think Kiria Katherina approves but she went on telling us to get rid of the hideous concrete 'bunkers'.

After borrowing a hefty electric stone breaker from D., who needs hard core for the foundations of the home he’s building a mile below us, I’ve demolished the remaining breeze block cisterns our vendors’ builder had put up along our side wall. Now there’s rubble there ready to go and spare plaka, but the house and path look better already. I’ve been wire brushing the wood burner ready for black stove paint. This must go upstairs to sit on an east wall where I’ve already taken up the marble surround. 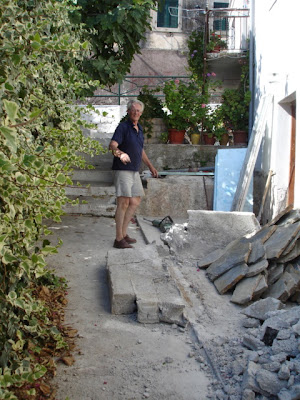 On Tuesday Nl & Gbr drove over from near Gastouri where we must go on 2 October to collect the bed Nl sold us, and enjoyed conversation that included Greece, England and Switzerland, the long-forgotten plot of Heidi, the disappointing way fish and chips get cooked, the prospect that women are more useful than men, the Swiss habit of doing three kisses to the Greek two and confusions that follow. We sat around our table and on the balcony as it grew dark. Only after they’d left did Lin and I ponder the fact that B’s expected visit hadn’t happened and we are back to where we were on 3 Sept so far as any further work on the house, except for the work we’ve* done ourselves. How I wish I was an electrician and joiner and plasterer to be free of this time-expensive dependency.