Got a note from Becky (her house - Ano Kato - is a close to ours in Ano Korakiana) who's back in England from a fortnight in Corfu:

Hi Simon. The Fenland drainage system is working overtime to cope with the excess water, but so far all seems to be OK.

We had a fantastic fortnight in Corfu, our house is coming along so much better than we ever imagined. I think we managed to locate 208, and if it is where I think it is we are only about 250m away from you - if you carry on past the cafenion in an easterly direction, you need to take the next 'lane' southwards; Ano Kato is about 30m 'down'!

Our builder is a really lovely chap, we had a meal with him and his wife, which we intended to pay for. X would not let us, so when we return in October, hopefully we can reciprocate! X's wife was a very pleasant lady who assured me that she could not speak any English, but had a much wider vocabulary than many people who live in our (home town)! She was full of insights into Corfiot customs, and during talk about family life was pleased to hear that 'wet nursing' for a relative or friend is still widely practiced. As someone who is keen on the promotion of breastfeeding, I found this to be a refreshing and creditable thing to do.

We did not get into any of the churches - we were too busy measuring up the rooms and thinking about finishes etc to look about too much, and it was rather warm!

I'd be interested to see any 'old' pics of the village, if you receive any! Becky 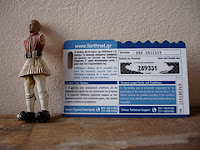 Amazon delivered the Complete Poems of George Seferis. I read on a Turkish on-line newspaper the fact that on the cover of Seferis' 'Logbook II' (poems between 1941-1944) was a mermaid - an image he put on all his works. 'But this particular mermaid...has severed arms.'

This April, Martin or Ben found an evzone without arms inside the roof space of 208 Democracy Street, where no work had been done for a long time. Seferis, in exile in Alexandria, was commenting on the Nazi Occupation.

From: Simon Baddeley [mailto:s.j.baddeley@bham.ac.uk] Sent: July 2007
To: Blue Plaques Subject: George Seferis - the Sloan Avenue blue plaque. Dear English Heritage. Your excellent website mentions the blue plaque commemorating Seferis’s time at 51 Upper Brook Street, but there’s another plaque to him in Sloane Avenue according to his wikipedia biography. Can you mention this one too – if it is indeed there? Kindest regards, Simon Baddeley 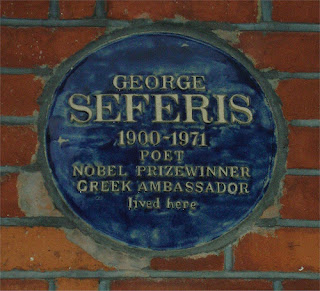 Dear Mr Baddeley, Unfortunately, the plaque in Sloane Avenue – if there is one – is not an English Heritage one, and therefore, it would not be listed on our website. Our website lists all of the plaques erected by EH since 1986, and all plaques erected as part of the scheme adopted by EH during that year, namely that run successively by the Royal Society of Arts, the London County Council and the Greater London Authority. Kind regards, Libby Wardle, Blue Plaques Administrator, English Heritage, Waterhouse Square, 138-142 Holborn, London EC1N 2ST 020 7973 3794

Dad and Maria lived in Sloane Avenue for what seemed many years - but I guess it was mainly the late 1950s. I visited there on Sundays from Westminster. They moved to Southfield House in Crawley (now a hotel) while one of my half-sisters kept on a flat opposite the old Sloane Avenue address for herself and friends. I cycle through the area and will look out for the plaque. Its glaze makes it seem different from other English Heritage blue plaques and may be different from the second plaque on Seferis' London home at 51 Upper Brook Street, Mayfair - up in the West End, which, just to be contrary, is actually about three miles further east of Sloane Avenue, off Grosvenor Square.

* * *
My Google alert function set to 'Greek Civil War', as well as throwing up toxic use-net bunfights (razors embedded) gave me the gift of this review by Richard Clogg of six recent books:

'A generation ago the publication of a scholarly book in the United Kingdom on the modern history of the Greek world was an infrequent event. The appearance, within the space of a few months, of the six books under review would have been unheard of, and is in itself a measure of the way in which the subject has developed exponentially both inside and outside the country.'