The Gate to Nowhere 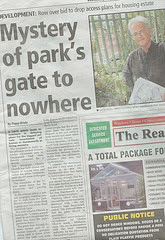 To: Chief Planning Officer, Birmingham City Council,
Re: N/01514/03/FUL Minor Amendment – Hamstead Road, Victoria Jubilee Allotments site, Handsworth.
We've been asked to comment on a “minor amendment” to application N/01514/03/FUL relating to the “omission of pedestrian access to Handsworth Park”. This access is via a gate midway along the northern border of the area of the Jubilee site - the point at which a “Green Walkway” links Crick Lane and Holly Road to the south of the site, via a play area and new allotments, to Handsworth Park. This public footpath was presented by the developer as integral to the layout of the site at the time the applicant was seeking public support. It was presented to Planning Committee in May 2004 when successfully obtaining planning approval.
Having inspected the proposed amendment, we object to it on the grounds that omitting the gate and footpath access in the original application leaves no other direct access point between Handsworth Park and the Victoria Jubilee site. This “minor amendment” will demolish the promise of a connection between Handsworth Park and the buildings, allotments, children’s play and sports areas on the Jubilee site.
Any increase in security that might be gained by the omission of the promised connection between Park and site via this gate (whose lock could be in the hands of Park Rangers as it is for other access points to the park) Is not worth the loss of permeability caused by its omission.
‘Permeability” and the avoidance of ‘severance’ contribute to Birmingham City Council’s “place shaping” responsibilities – in this case those elements that help prevent homes, allotments, sports fields and park becoming separate enclaves.
This ‘minor amendment’ is inconsistent with the principle of permeability contained in the policy document “Places for All” approved by Birmingham City Council in 2001 as Supplementary Planning Guidance for all development proposals in the city. See: http://tinyurl.com/25glr9 Furthermore, the gate, whose omission is the subject of this application, will stand opposite another gate in the new railings bordering the south edge of St.Mary’s churchyard. These gates are waypoints on a footpath that before the park lake was laid out in the 1890s - a path recorded in the archived memoirs of older residents who walked to or from from St.Mary’s Church, at first directly, and later around the lake, through Victoria Jubilee Allotments (marked by a hedged lane until 2004) and on to Soho Road. To permit this “minor amendment”, or to replace its function by a compromisethat allows only a circuitous route between park and Jubilee site, will erase even more local history.
Robert Frost (1964) said “good fences make good neighbours” but his poem began “something there is that doesn't love a wall.” Omitting a pedestrian access to Handsworth Park from the Jubilee site changes an attractive and secure part of the park’s southern border into a permanent barrier between these two areas.
We ask members of the Planning Committee to defer or reject this amendment, pending information on how the Jubilee site will be linked to Handsworth Park for the benefit of those living there and those, not necessarily residents, who will, in future years, benefit from the resources of what could prove a popular well integrated mixed-use development redounding to the credit of all involved. Yours etc., Simon Baddeley, Handsworth Allotments Information Group
Posted by sibadd