The Channel versus the Ionian 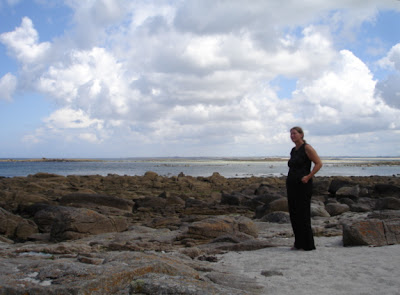 On Monday the sun was out. I guided our company to the places I’d visited by cycle the day before. I pretend it doesn’t matter but for us, who eat at home and don’t want to go to cinemas or exhibitions, the weather affects us since our pleasure is to stroll the coast and picnic on beaches, read, gaze and chat. Lin parked near Pointe St-Jean, on the estuary coast just west of Pol. From here Dorothy and Arthur could stroll gently along a narrow coastal path. A field of onions protected by a thin high hedge of domestic shrubs bent in the westerly wind until the path neared the wooded point where gorse, flowering privet, elder and broom mingled with waving grass (especially the seaside species with light furry tips), thistle, clover, white and pink campion, saxifrage, buttercup, poppies (small and large), egg and bacon, vetch, small violent hyancinths,pink achilleon, Queen Anne's lace and daisies. Crude disks of raw earth and ripped surface roots stood head high beside the path, marking a line of gale felled pines, kept green by their tap roots. Some of these little disasters had created alcoves in which inventive children, by weaving braken between splayed roots, might have made cosy seaside dens.
We went on to Ilôt Ste-Anne for lunch at a table in the park there and I worked through a dozen oysters bought from a vivier at Porzdoun for €3.64. 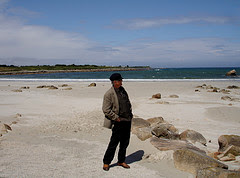 When I gaze at the sea here I feel less envy for not being on it now we know ‘Summer Song’ lies at Ypsos. But it’s strange that I still find this channel-Atlantic coast more understandable and readable than the lake like littoral of Corcyra. Here are innumerable off shore rocks surfacing and sinking between the ebb and flow of the highest tidal range in Europe. Harbours that present themselves as open jaws to approaching vessels, ocean swells and local currents to beset the becalmed and where a forceful wind meets an opposing tide the long waves steepen, trip and break, threatening heavy surf far from shallow water. Yet I look more apprehensively on the waters between Ipsos and Igoumenitsa which, even when the wind blows strong from the south, seem like no more than a gale in the Solent. Yet the Ionian makes noises I find ominous. The waves are low but too short and steep. There are no tides but the winds bring currents and the mountains, so beautiful and grand, set conditions for katabatic squalls that tumble, chill and solid as matter, down their slopes bringing blasts that come too hard and fast to spill from unreefed sails. An Atlantic sailor might sneer at Ulysses’ difficulties. He’d be a fool to be taken in by a sea that so regularly presents as an enchanted lake. I recall the skipper of a supertanker in which I’d sailed from England for a terminal near Beirut, too far offshore to see more than the haze of Lebanon, saying that of the seas he knew ‘the Mediterranean was the worst’.

Hi Lin. Stopped for a couple of weeks to fix boat and earn some money. Garden area finished now, waiting for … some lightweight plaka … to use as the vertical bits on tree tub in patio and uprights on steps. Martin is finishing off a job in Skripero that he left to start your job. He should be there another week, then back to your place to put window and fire in. Once that's done, then we will get Ben back to plaster the wiring in, and plaster around the window and fire, …. Spent two days looking around various shops in Corfu for stuff on Internet you found. Not available in Corfu. If you want floor sealing before varnishing, you will have to bring out along with water based varnish when you come out.
Sealer takes 12 hours before varnishing, varnish is 8 hours between coats.
Sold 80 euros worth of spare plaka, still have some left. Costs to date are extra 83 euro plus fire and window, so we are doing ok for cash. Will pick up fire and window next week. Have a nice time in France, Best regards, George