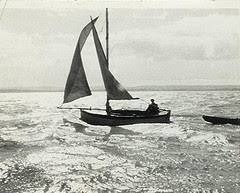 We moved in 1960 to live near the sea. I learned to sail in a 17 foot clinker built gaff day boat with a leaky centre board case. Her tiller was carved with the head of a fish. Her sails were canvas - foxed from being stowed wet. 'Hoppy' sailed kindly - the length of her boom finely calculated to avoid weather helm. My first voyage was across the Solent from Keyhaven to Yarmouth - two nautical miles of open water. I arrived there around 5.00pm one summer evening and took the bus to Newport, capital of the Isle of Wight. I had fish and chips and went to to see 'King Kong'. I got a bus back to Yarmouth and sailed homeward in the dark. I missed the unlit Keyhaven entrance and had to sail against an ebb tide to Lymington where I moored about 2.00am. I was proud at having crossed the Solent without paying for a ferry. Danica Originally uploaded by Sibad.
I sailed to Greece in 1962 with Chris Jameson from Colchester. I found him by advertising in 'The Times' . Our boat was a 25 foot marine ply sloop designed and built by Denys Rayner near Newbury, Berkshire. My stepfather, Jack Hargreaves, sponsored her design and construction at a time when there was great interest in pioneering affordable seaworthy small sailing boats that could crawl creeks at weekends, be comfortable for families, sail oceans, yet be hauled on trailers and sit upright on a mud berths. He christened her 'Danica' - Latin for his favourite fly. "Take her where you like" he said, wanting, with her designer, to see how she performed. "Get yourself a skipper" he added, knowing I had small knowledge of the sea despite explorations of the Solent in 'Hoppy'. Chris, my skipper, tutor and companion, sailed us from Lymington to Le Havre in April. With mast stowed, we motored through French canals and rivers via Paris and Lyons to Marseilles. In the Mediterranean we sailed along the Cote d'Azur, crossed to Corsica, then on to Naples (enjoying ice cream unknown in England),

from where, via the Straits of Messina, we ran eastwards over wine dark sea making the same landfall as Byron between Zakinthos and Kefallonia - high shapes looming in a warm dawn haze. After anchoring for a welcome off the fishing village of Killini we passed immigration at Patras and then sailed and motored with day breezes and calms to the Corinth Canal. Passing through that astounding defile we arrived at Tourkolimano, Athens, in early July (heat I'd not experienced). A few weeks later, joined by Christopher's sister Elizabeth, we sailed homewards round the Peloponnese to Zakinthos.

On to Syracuse in Sicily, then Malta, Bizerta in Tunisia, and northwards via Bonifacio in Corsica and on to Sète and the Canal du Midi. Via the canal we motored to Bordeaux, setting sail again up the Gironde estuary and entering the Bay of Biscay where south east of Finisterre we weathered gales (and my fear) before passing into the English Channel arriving in Lymington at the end of September. 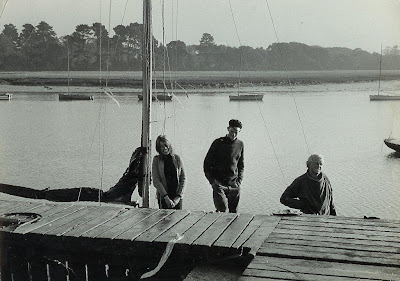