Brompton in our garden in Birmingham Black Brompton in our garden
This bicycle was mailed to Corfu and is the one I've used for getting around there. I was able to cycle 15k from Corfu city up to Democracy Street without walking the bike - so well graded is the route. I took rests - especially on the hill above Pyrgi - and was refreshed by the locally made ginger beer. A green Brompton - a later model - is my transport of delight in UK.

* * *
I've been rivetted to a book of essays edited by Mark Mazower. 'After the War was Over. Reconstructing the Family, Nation and State in Greece, 1943-1960'. "If any era deserves the epithet 'tragic' then it is the 1940s in Greece" writes one reviewer. "Given that the volume aims to showcase cutting edge research, it inevitably raises as many questions as it answers, pointing productively if perhaps rather untidily in numerous directions." h
My interest is not new. My Dad's second marriage to Maria in Athens in 1948 made half my family Greek and gave me three more sisters, a brother and a habit of unembarrassed kissing in public. My step-mother died in November 2005 and lies with her husband in All Souls, Kensal Green Cemetery. This portrait by her first husband Yiannis Moralis hangs in the National Gallery of Greece 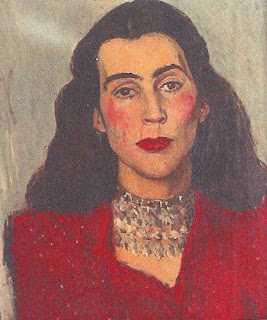