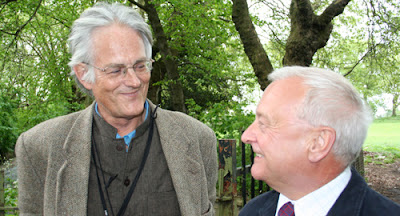 My friend Nick Booth e-mailed me the podcast I did last week with Cllr. Badham in which we discussed the future of Black Patch Park. The Friends - about 9 of us - have been meeting almost monthly at the Soho Foundry Pub, arguing, laughing, sometime bickering and planning together as we've lobbied Sandwell Council for the last four years over their plans to decommission the Black Patch and use the land for hi-tech industries. We wrote letters, attracted media attention via community reporters, held events in the park, circulated leaflets including Christmas cards, put a video petition on YouTube, took opposition councillors round the park, met with senior representatives of the non-elected agencies that tend to pull the most strings on cash flow into the area, spoke at consultation meetings, wrote an entry for the park in Wikipedia, got further publicity and support from the descendants of the Gypsies forcibly evicted from the Black Patch in the 1900s to create the original park and got regularly updated entries on the website of their local historian Ted Rudge - one of our members.

Hardly a month ago, Badham, portfolio holder for the Built Environment, had a change of heart, so now we have to stop campaigning against closure and start getting inventive about where the money can be found to rejuvenate the Black Patch for the future.

The hi-tech industry the Council hoped to attract never appeared. Instead the best hope lies in the international draw of Soho Foundry restored and complemented by a lovely park in front of its gates.

Direct link to the mp3 of the podcast.
Posted by sibadd