Working on the house Work break
Originally uploaded by Sibad.
Monday, April 23, 2007
But for apprehension I’d delight in the continuing heat. The nights are cool, the skies clear. The breeze blows inshore or offshore depending whether sea or land cool slower or heat faster. Our chosen roofers were started by 0800. At 0915 I drove our rubble helper up to the house from Ipsos. With regular drinks of water and a couple of cups of tea he laboured through the heat until 1400 while Lin painted and filled. I moved stones, and raked the rising surface of the triangle of ground below the house. “There’s a lot of stuff here” observed our helper. “We’ll get it all in tho’” I said. One of the roofers suggested finishing it with ‘plaka’ paving. As for the roof: “We can finish it before you go.” We’ve a mix of old Corfu tiles piling on the balcony. While tomorrow moulded modern tiles will come off the lower of our two roofs, where one storey had a floor with two rooms, added by a builder working below spec, hence the need to insert waterproofing and insulation. An armless model of an Evzone was inside the roof - guardians of the Hellenic Parliament, the Tomb of the Unknown Soldier and the Presidential Palace. 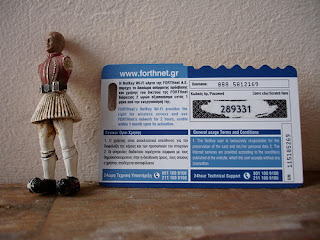 In the heat when the village was quiet and morning work done, I shook three big lemons from our tree, juiced them, added ice and sweetened them to our tastes. Another builder visited to estimate widening the staircase and taking out an interior wall.

Sunday, April 22, 2007
Seven wooden chairs at €1 each from a lady at the Kontokali table sale, more china and another quilt. Our friends sold us the fridge and the builder’s friend, returning to UK, sold us his microwave.
Had a meeting in the taverna at Kato Korakiana to discuss further work and a lesson in drinking Ouzo. Two glasses. One for ouzo. One for water and ice. Dilute to choice as you go along and get the pleasure of seeing the Ouzo turn white with the first addition of water.

Saturday 21 April 2007
Lin found a carpet in a flytip on the beach. We brushed it clean on the railings above the house and laid it in a downstairs room. 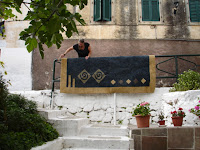 In the early evening Lin drove us up the zigzag road to Sokraki. At Emily’s, opposite a tree pollarded to avoid cables on which hung Christmas lights, we had toast and cheese and watched drivers negotiating the streets converging on the platea. 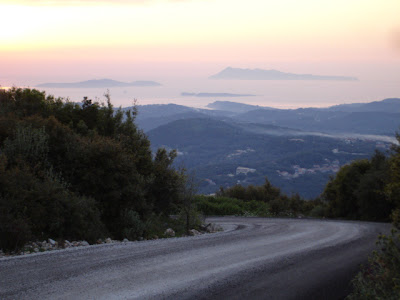 Then west towards Troumpetta by a half completed road from which, as we descended on gravel, we could see Cape Kavokefali and further NW Mathraki, Othoni and Erikoussa islands on one side then round a bend an equal panorama to the south.

Friday, April 20, 2007
Went to a house in Skripero to see our roofer’s work. Looked good – with the insulation over and not under the wax paper, Corfu style to reduce condensation inside the roof. Then to town to buy spade, barrow, lump hammer and rake. Traffic in Corfu town congested but we found Skiadopolos the paint supplier after a mobile chat for directions. Could tell it was a professional place local builders scurrying. Back to the house to help tidy after the plaster boarding had been sanded. Tidied the house is bare but beginning to look more as we’d like it. Had wine and salad and bread under the veranda. The village is a quiet cacophony of children’s voices as they play, adults chatting, a radio commentary somewhere, a noisy scooter now and then, someone doing band practice playing drums, a neighbour’s child singing a few lines of the Allelulia chorus over and over, cocks crowing, pigeons, frogs and occasional dogs barking. None of this is galling as no sound bullies another. How I do like the high dark houses here with lights behind shutters.
Posted by sibadd